Below is a great video interview with Bill Gates Jr. Here he talks about how we can eliminate so many things with vaccines and science. 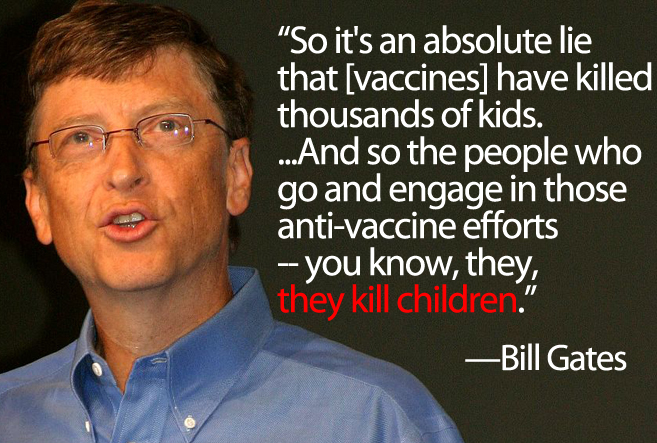 What I also like, is him speaking about the outright fraud perpetrated by those who claim that there is a link to autism and vaccinations. Bill points out that there was a FINACIAL REASON for the fraud and how the journal(s) and media just let it go!

Gates also points out that all following and follow up studies showed this but that they got no press!

This is just the same as the fraud of 'man made global warming' that has been perpetrated by those with, what else, FINANCIAL GAIN, for nearly two decades! But that is for some of my other posts...

I personally think all those involved should be put on trial and have worse done to them.

A good comment he makes, which is true, is this: "By and large, it[vaccination] is the one health intervention that can get to everyone. In fact, it is so simple, people often forget what a big deal this is. The 2 million people that would have died from smallpox now don't think, "Wow, I'm alive today because of vaccinations," but that's the case."

He also does address some issues of moral responsibility for those that have been blessed to be 'higher up'. I think it is a wonderful thing him and Melinda are doing! Have a watch:

Here is the link to the original full article.